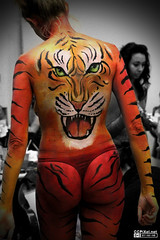 by Eye – the world through my I

Under the skillful hands of body-painting artists, bald heads look more impressive and eyes-catching than ever. It’s clearly known that body-painting art has become so popular in the recent fashion trend among youth, especially among celebrities. We often think that body-painting art is only suitable for females; however, it has now been much favored by males. And Philip Levine, the English man has made a new style and has fun with his bald hair. It’s probably said that Philip is the forerunner of the head-painting trend. Let’s see how original painted-bald-head images of Philip Levine are as below.

Philip Levine became bald in his early twenties; he decided to make fun with his hair instead of getting depressed about it

With the creativity of the professional body-painting artist Kat Sinclair, Philip was painted on his bald head with lots of vivid and funny pictures

It looks like the golden cap put on his head

Louis Brown lives in California, where he enjoys writing articles on a variety of subjects, especially lifestyle. By trade, he is a user interface designer