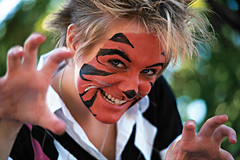 There are a number of methods for introducing artificial colour to fish, although specific information on methodology is sometimes scanty.

A common method of creating “painted fish” is through injection via syringe. Generally, fish are injected multiple times. Fish may also be dipped in a caustic solution to strip their outer slime coat, then dipped in dye. This method is reported to have a very high mortality rate.

Many varieties of “colour-enhancing” foods for aquarium fishes are available to the consumer. Generally, these foods contain natural dyes such as beta carotene and are not harmful to fish, although as with other dye methods, the effect is temporary. One source reports that harmful dyes are sometimes used by wholesalers, however.

Fish can also be tattooed using a low-intensity laser with a dye, a process developed for fisheries by scientists but this technique is now applied to ornamental fish.

Aquarium fish genetically modified to fluoresce in bright colours under white or ultraviolet light are now available commercially in the United States, under the trade name GloFish. The technology was developed originally to produce a fish capable of detecting environmental pollution. These zebrafish are available in several fluorescent colours, protected by a United States patent.

It’s not introducing any kind of artificial color, but provoking the apparition of mating period tonalities by administering hormones. This is argued to be used for minimizing the stressful effects of transport in fish aspect. This might also be used for making females of certain fish species look more colorful, despite this can also render them infertile.

Some species, such as albino Corydoras and “painted” glassfish, are injected with dye using a hypodermic needle. In more recent times (2004-2005), injection dyed albino Plecostomus and rift lake cichlids have also become available. Other than the Indian Glassy Fish, most dyed fish are albinos.

A 1998 survey carried out in the South of England revealed that over 40% of painted glassfish showed signs of a Lymphocystis infection, compared to 10% of unpainted glassfish. The infection may have been caused by transmitting the virus from fish to fish via an infected needle, or by a reduced resistance to the infection due to stress from the injection process. In addition, fishes injected with dye often die without apparent external disease symptoms, presumably due to kidney disease caused by injection.

Some members of the aquarium trade want to ban this practice. For example, the British publication Practical Fishkeeping started a campaign in 1996 to ask retailers to stop selling dyed fish, which led to a significant decrease in the number sold in the United Kingdom. Practical Fishkeeping has launched a similar campaign with a global scope and maintains a register of stores which do not stock dyed fish. The Royal Society for the Prevention of Cruelty to Animals (RSPCA) regards the practice as cruel and unnecessary cosmetic mutilation. A campaign in Australia and in the UK has limited the sale of these fish. Dyed fish are still available and are generally imported from Southeast Asia.

In February 2006, the UK’s Department for Environment, Food and Rural Affairs (Defra) confirmed that it will not be making it illegal to sell dyed fish in the UK under the forthcoming Animal Welfare Bill.

^ a b Shirlie Sharp. “Death by Dyeing”. About.Com. http://freshaquarium.about.com/cs/beginnerinfo/a/paintedfish.htm. Retrieved May 19, 2006.

I am an expert from China Toys Suppliers, usually analyzes all kind of industries situation, such as cupric acetate , tert butyl chloride.